The Cyclades are undoubtedly a classic representation of all the Aegean has to offer. A timeless landscape of white washed villages on desert like islands, sapphire blue sea melting into the deep blue sky, weaved with scented summer warmth and greek music  along the waterfronts.

The name Cyclades (Circular) derives from the fact that the islands surrounded the ancient Greek shrine on Delos. Coincidentally the islands also lie at the geographic center of the Aegean. Santorini is a small circular shaped archipelago of islands of volcanic origin, located in the south Aegean sea, and is the most southern of the Cyclades group of islands. The archipelago consists of the horse-shoe shaped main island of Thera and the smaller island of Therasia, across the lagoon within which we can see the two volcanic cones of Palea and Nea Kameni plus a couple of islets.

The caldera is the physical incarnation of the island’s history. The sharp and beautiful scene of circumventing steep cliffs is the remnant of what was probably the largest volcanic explosion in human history. Santorini was once a complete island. A large mountainous, roughly circular land mass, with a typical central volcanic peak. Thousands of years ago, during the final throws of a major eruption, the implosion of the magma chamber resulted in the sea flooding the massively enlarged caldera, forming one of the largest crater lakes on earth and creating the beautiful scenery we see today.

The floor of the caldera lies generally between 200m and 400m below sea level, representing a total drop between cliff top and sea bed of over 700m.  The clearly defined and variedly colored strata of the cliff face, as seen from the water are a legible section through the geological history of the island.  The eruption itself was so great that the airborne volcanic ash in the stratosphere provoked a period of climatic cooling around the world.  It altered the entire course of history in the Eastern Mediterranean and it may be the central event at the heart of the myth of Atlantis, recounted by Plato. 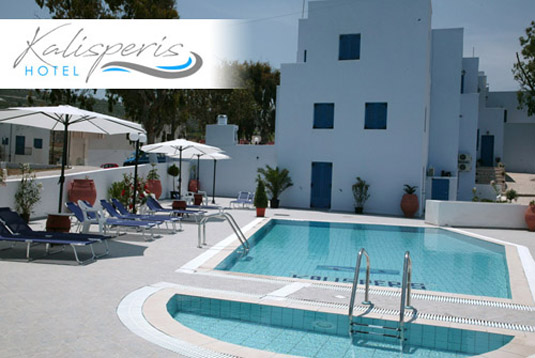